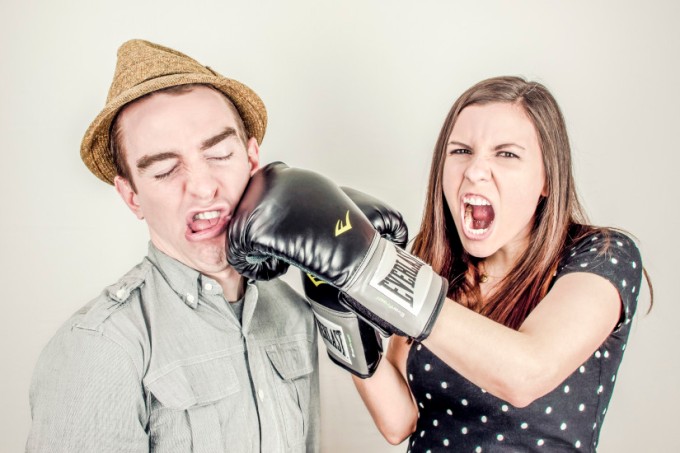 For centuries men have grappled with ways in which to please their women because the truth, according to them is a resounding: you cannot please a woman! However, that sentiment is far from the truth! Unless it is not ‘that time of the month’ or menopause, women generally are very easy to please…very very easy believe me.

As usual, I was watching something when I was confronted with this easy puzzle which I posted earlier today to my social media feeds:

This puzzle is for all the men to solve. How much do you know about the women around you?
We just celebrated International Women’s Day yesterday so let’s see how well our men know their women, shall we?
You are out of town for some important business. Your girlfriend just moved into a new apartment, the walls are still freshly painted making it hard for her to breath…in the end she gets a terrible headache. She tries to go outside for some fresh air and she’s met with strong fumes of smoke coming from the oil factory not far from her new place. The air outside too is not friendly. She then calls you and complains (nags) about her predicament. Then you suggest to her that it’s better if she stays inside because the paint can’t be as bad as the fumes outside. Unfortunately, your response only serves to aggravate her even more. She cuts the line. You are puzzled so you call her back and suggest that she go outside…somewhere else for some fresh air instead. Alas! She’s still not pleased with that either. What do you think would be the right response that would please her in this case?

As expected, it was fun reading all the interesting responses from my male friends but unfortunately, none of them was able to provide the correct response. You see, the biggest problem men have, as witnessed from the responses and just experience in general is that they try to confront most puzzling situations they find themselves in with logic. And this is why women have ended up being labelled as nagging. You have to realise that we (women) do not necessarily nag our men. The situations only appear to be so because the men we are dealing with have refused to look at things from our point of view.

For my own personal satisfaction, I came to a very dangerous conclusion (one which might be considered a felony in the scientific realm I am sure) but here’s what I have concluded; that because all kinds of life (male and female) have to pass through a woman’s womb…in fact – spend quite some good time there, and even after being released to the world they have to be nurtured by the very hands of the woman, the result of all this is what culminates into women’s ability to understand their spouses, their brothers and all the men around them…because whether we like it or not, we are somehow responsible for how they turn out to be. There are of course exceptions to my extreme assumptions but let’s work with this for now. So what am I trying to say here?

I am trying to say that it is very difficult for men to understand women because of two reasons mostly; they are biologically and socially challenged, and they tend to be too logical most of the time. You see, men hate grey areas. For most of them, it should either be black or white. Sadly, it is this same logic they futilely apply in relationships. The reality is that there will always be a lot of grey areas in relationships because you are dealing with something that was founded on something illogical. The ultimate love is one that has no reasons. Isn’t this why most people in-love behave like fools? When you have to deal with emotions, be prepared to face challenges, ones that cannot be solved with calculus. You need to put yourself in the most simplest of positions in order to please a woman because the truth is that solving the problems they throw at you every single day is not very complicated.

There is one universal answer to all the nagging and constant headaches that women render on Adam’s descendants. That answer is a four lettered word many have come to call LOVE. If you love her, then you will understand her. Now, I am not saying that all problematic situations caused by women are understandable, no. There will always be women out there who ride on the other side of the psychological scale believe me, always getting a rise from making the lives of others hell. But why do I say love? Here’s why:

Remember that puzzle I posted above? The correct answer that any woman around the world would have been happy to receive is:

I am very sorry to hear about that my love. Are you alright? How I wish I was there with you right now…it must be so hard on you all alone over there….

And that conversation would have moved on from the paint or the fumes to totally something else! The issue here as the writers of that insightful scene I was watching pointed out was neither the paint nor the fumes…or where exactly the woman was supposed to go to get some fresh air. All she needed was someone to listen to her as she expressed her grievances and offer her support. It is as simple as that! The man didn’t need to start calculating how much was needed to get her a new place, to have her follow him wherever he was and all that. He just needed to show he understood her situation. And of course she knew exactly what the best option to take was.

Handling relationship problems with rationality doesn’t always go the way we wish it would. Most of the time the correct answer is the easiest one of them all and one that men rarely consider when confronted with such situations. I am of the belief that it is not that women are nagging and that men are easy to deal with. The major reason why men’s problems that are related to women seem easy to understand is because women have the ability to see things from both points of view. Unfortunately, for a man to realise his errors, the woman will need to pound it into or out of him first just so he can realise he made a mistake and only then will they try solving it together which doesn’t always go well.

Yes she knows she’s put on some weight so she doesn’t need you to embarrass her by saying, “you have become too fat. You don’t look sexy any more. Soon you will need a new wardrobe.” There are better ways to help her get back in shape. How would men like it if women blatantly told them, “Your penis is too short you barely hit the spot every time we make love. Soon I will need a new pair of balls.” It’s not nice isn’t it? There are also better ways of addressing that issue without shuttering someone’s esteem for life. Words can break or make a relationship. I guess this is why they say most problems in relationships are solved through communication. Prayer on its own will not cut it. In order to solve problems, you will need to talk about them first.

So for our loving and caring boyfriends or husbands, we do not need you to bring the moon to us or swing from the chandelier to please us. Mostly, we need you to see things from our point of view, that’s not rocket science, is it? It always helps to think, how would I feel if I was in her shoes…with all the boobs, the ass, the periods, the pregnancies, the babies, the home drama, and unfortunately, even menopause. All throughout our lives we have to deal with hormones that are constantly changing and trying to adjust. I don’t think we are responsible for half of the things we say most of the times! I am joking.

But on a serious note, just as we will strive to understand that men need their time out with the boys, that they need their socks in right pairs every morning, clean and ironed clothes, food for breakfast, lunch, dinner, watch soccer undisturbed, that money doesn’t fall from trees, that they will always leave the bathroom and clothes in a mess, that they sometimes they just want to be left alone without being nagged…men should also understand that being a housewife isn’t an easy thing, that we want to be pampered too, that babies are made by two people and should thus be attended to by both, that just as they need clean clothes and what not, we need our hair and nails done, that we get tired too, that we want to watch drama’s without being ridiculed.

All it takes to achieve all this and have some peace around the house is a little more love each passing day.